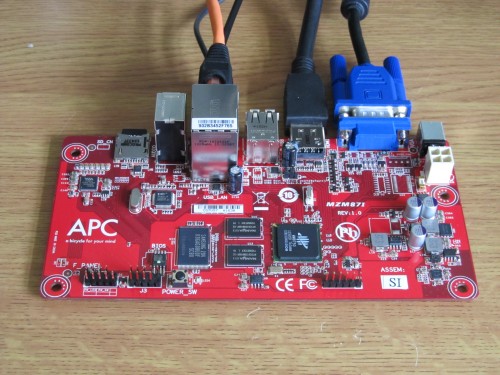 There was a lot of excitement in the hardware hacker community back in May 2012 when VIA announced APC.IO – a $49 all in one Android PC. I was excited too, but my excitement quickly faded away when I received my two APC’s a few weeks ago and booted them up…

The price – it’s just crazy! The board itself costs just $49, but delivery charge for two of them was $43! So the price of the board came to $70.5 and that’s a lot considering that it’s only a bare board without a case. Some people complained that they received import charges bumping the price even more. For the same price, you could get a lot nicer package and better performance by purchasing MK802 or one of it’s clones.

US plug for UK customers – you will need an adapter to get it to work.

The performance is unsatisfactory. It takes 30s to boot! It comes with Android 2.3 without Android Market out of the box and very limited amount of application preinstalled. Android Market can be installed though. I could not get the full HD version of Big Buck Bunny movie to play consistently on the HDMI output. After a few seconds it kept bumping back to VGA output. I suspect that maybe it was overheating?

No official support for other operating systems like Linux. This is a huge disappointment, because Linux could make the device a lot more useful and powerful. Android that comes with it is just too limited.

The price is just too high. It would make it a lot more attractive if it cost somewhere around $35 with a reasonable delivery charge. It desperately needs a Linux port to be able to use the full potential of the device. With all the limitations the slogan “A bicycle for your mind” just does not make sense.  I should strongly suggest looking for alternatives and avoid buying APC.IO for now until it’s a lot more open, has all detailed header pinouts and most importantly – a fully featured Linux port.