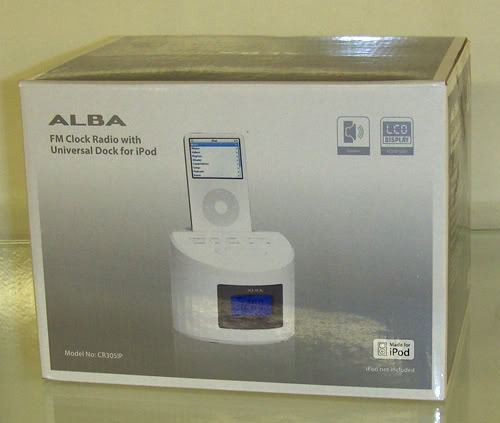 I bought this Alba FM clock radio a very long time ago at a car boot sale for £2. Seller was selling a bunch of them. It had everything in the box: power supply, cables, various iPod dock plastic bits and even AV cable. Took it home, plugged it in and… it was working, but no audio at all. I could control the iPod, set the clock and etc, but it just did not make any sound. Well, you know… it was just £2 :) So it was left in a cupboard for a very long time until today I decided to take it out and have a look at what’s inside.

It was very easy to disassemble. Just a few Phillips screws, nothing interesting. Inside there was a bunch of boards all connected together. 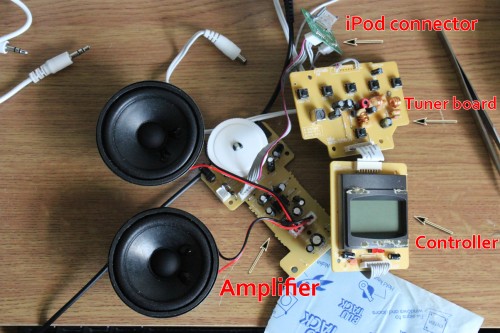 A few more close-up pictures where you can see that boards have silkscreens which describe the connector pinouts. Nice! 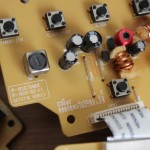 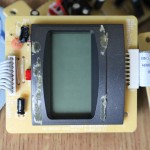 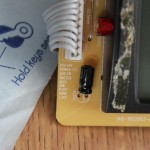 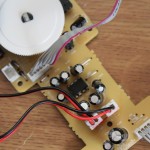 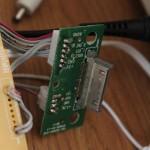 It consist of 4 boards interconnected together into sort of a circle:

It was time to start troubleshooting. 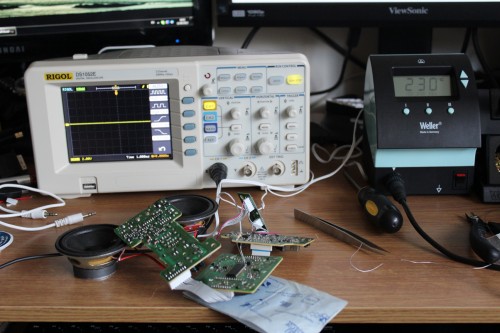 I started with testing the audio signal by connecting iPod and following audio path with the oscilloscope up to the amplifier board with TDA2822. A quick check on the sample schematics for the chip

I could see that the signal comes to the inputs on pins 6 and 7, but there is no output on pins 1 and 3. Strange… I started suspecting a faulty chip, but then decided to check if the chip is getting power at all. Nope, no power for the chip. I noticed that it’s not powered directly, but actually power comes from the controller board on a wire named POWER-CTL, goes into few transistors and finally to the chip. This means that the amplifier chip is automatically powered down when controller goes into standby.

A few more tests later I noticed that the signal was never sent to the board when I turned the radio on. I found the microcontroller pin that was sending the signal, but it never reached the board. It all pointed to a faulty SMD transistor. Looking at the board I figured out that this was a PNP transistor and just as soon as I soldered another big one in, it started playing tunes from my iPod! 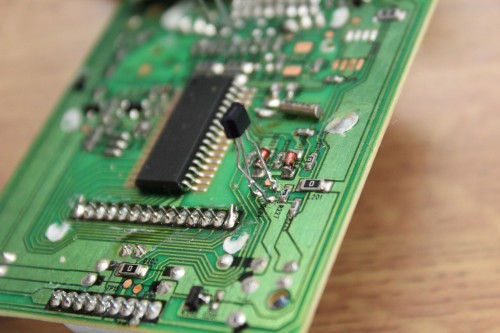 So iPod was playing through the speakers, AUX input too, but switching to radio source silence could only be heard. Checking the board I also noticed that there was a TUNER-CTL signal going from the controller board to the tuner. Tracing it with the oscilloscope I noticed a similar pattern: a signal is switched on the microcontroller, but it does not get to the tuner board. This time it was a 47k SMD resistor causing this. A quick check with a multimeter in the circuit showed no resistance at all. Strange so I took another big 47k resistor and soldered it on top of the SMD resistor and radio started working!

Now it was time to cleanup a bit and solder the components properly. When I removed the SMD resistor it showed the correct 47k resistance. Yeah, I know that I shouldn’t be measuring components in circuit, but sometimes it’s a quick and easy test. It turned out that when I soldered my own 47k resistor on top, the total resistance of the two resistors became 47k / 2 = 23.5k. Funnily, that made the TUNER-CTL signal finally reach the tuner board. Did they make a mistake during the assembly and soldered a too high resistance SMD resistor? Did they even test it before packing up? Yeah, it’s Alba, a brand you probably shouldn’t trust. I removed both 47k resistors, soldered 22k and the radio started working again as it should have. 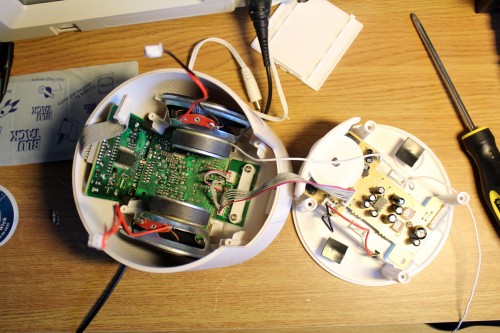 A quick check just before putting in last screws to make sure that everything still works and my assembly didn’t screw anything up. Great, it’s still working fine! The audio quality is rubbish, but I had more fun fixing it and finally got to experience the benefits of a high quality oscilloscope to troubleshoot faulty electronics. Couldn’t have done it without it. 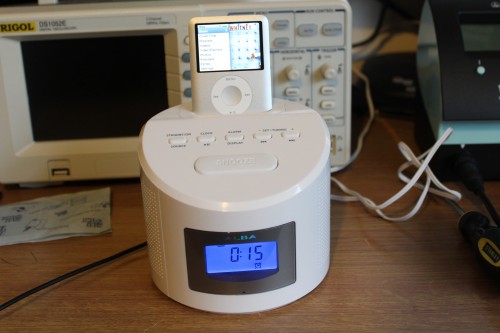